Before my trip to Costa Rica I had never given much thought to visiting the country. Sure it sounded tropical and exciting (volcanoes, wildlife, beaches!), but honestly, those aren’t usually my first thoughts when I’m planning a vacation. (That’s more like shopping, museums and city life!) Now that I’ve been though I’m positive Brent and I will want to plan another trip back! I filled you in a little on the first part of the trip which mostly consisted of a weekday schedule of working (him at an office, me by the hotel pool – I got the better end of the deal, I think!) and then the first weekend we visited the Poas Volcano (which was really really cool!) and spent some time relaxing and wandering around the hotel area.

Once Brent’s time working was finished that last Friday we headed for Quepos for a last weekend in Costa Rica before we headed home. Brent was turning 30 on the following Monday and we figured a weekend in Costa Rica was better than anything we could come up with at home to celebrate! We could not have been happier with everything about that weekend!

Why Quepos? Here’s something we learned from the locals. Tourists visit Jaco (which reminded us of Cancun or the beaches in Florida) but locals like Quepos. Since we weren’t looking for the “spring-break” version of Costa Rica we opted for Quepos and were so happy we did!

One of Brent’s co-workers in Costa Rica offered to drive us to Quepos from San Jose (which is INSANELY GENEROUS considering it’s about a 3 1/2 hour drive!) and we made a few stops along the way, including a stop to look at some crocodiles which was, well, terrifying! 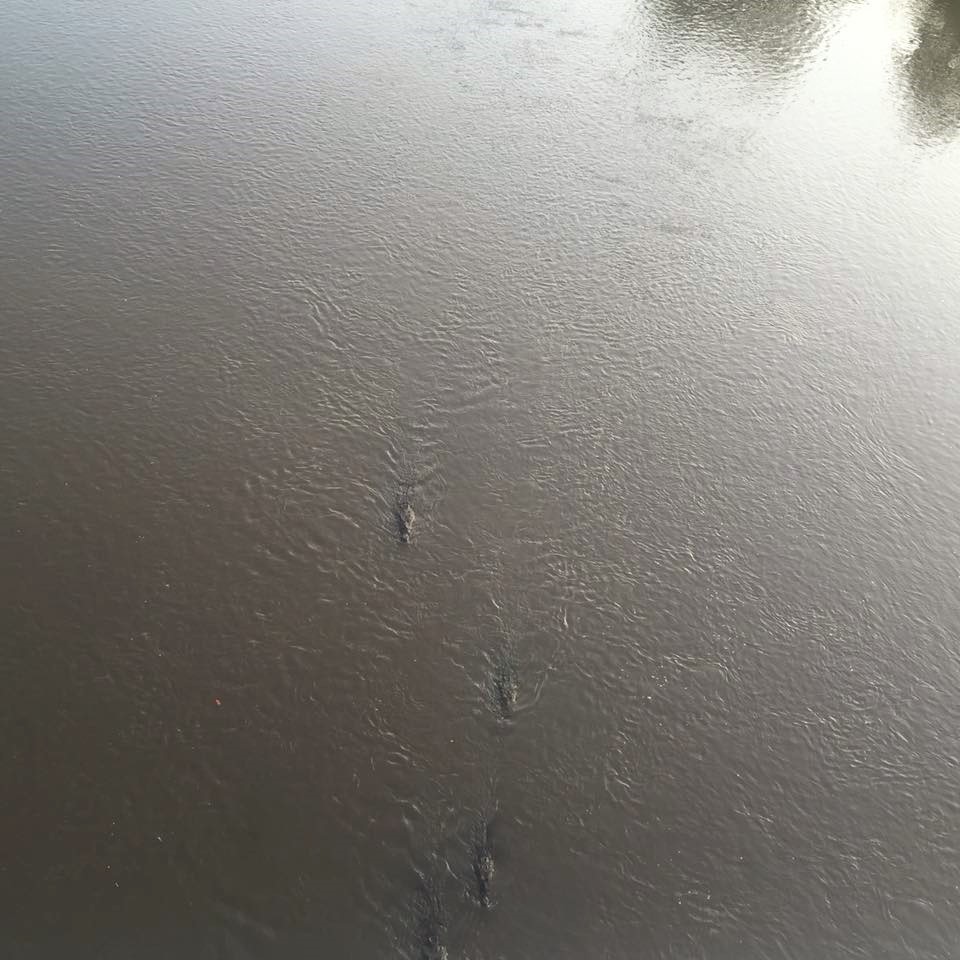 Oh don’t worry, there were plenty more (and probably a ton more we couldn’t see!): 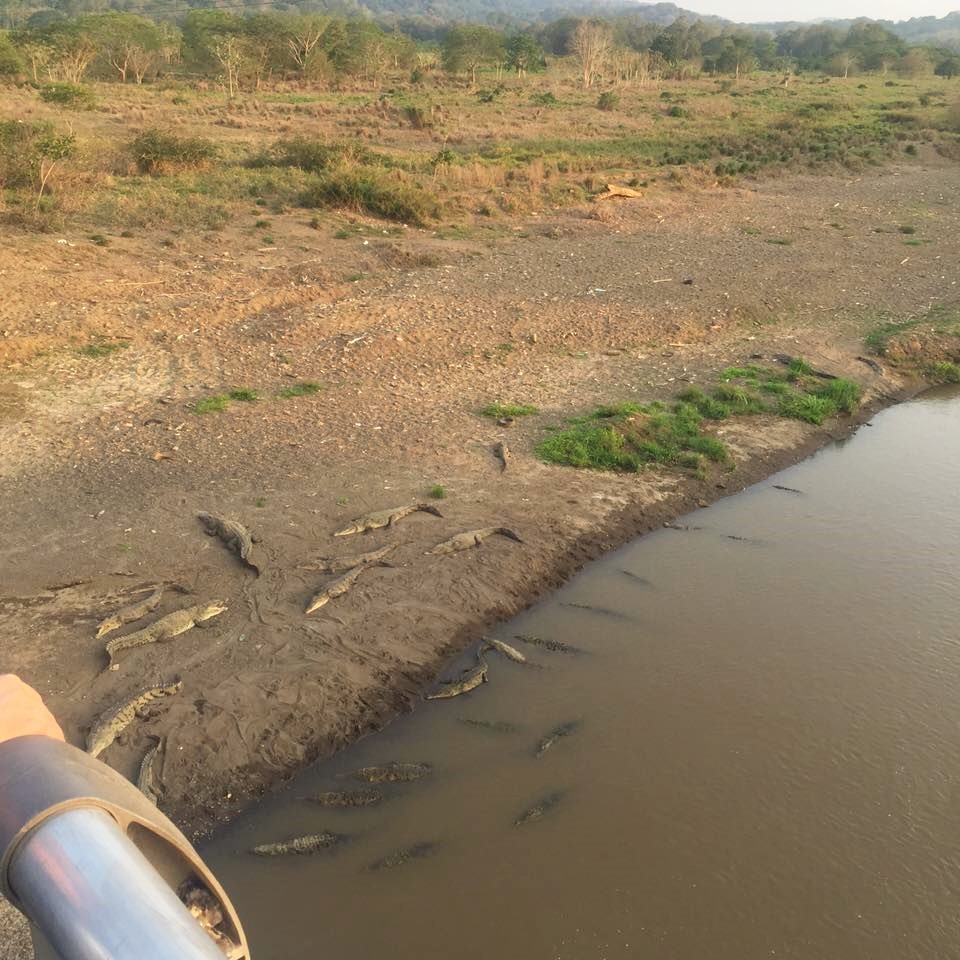 We stayed at La Mariposa Hotel in Manuel Antonio because it was a) gorgeous, b) close to the ocean and the Manuel Antonio National Park (and the hotel provided a shuttle for us). It was an amazing place to stay and we would stay there again in a heartbeat! 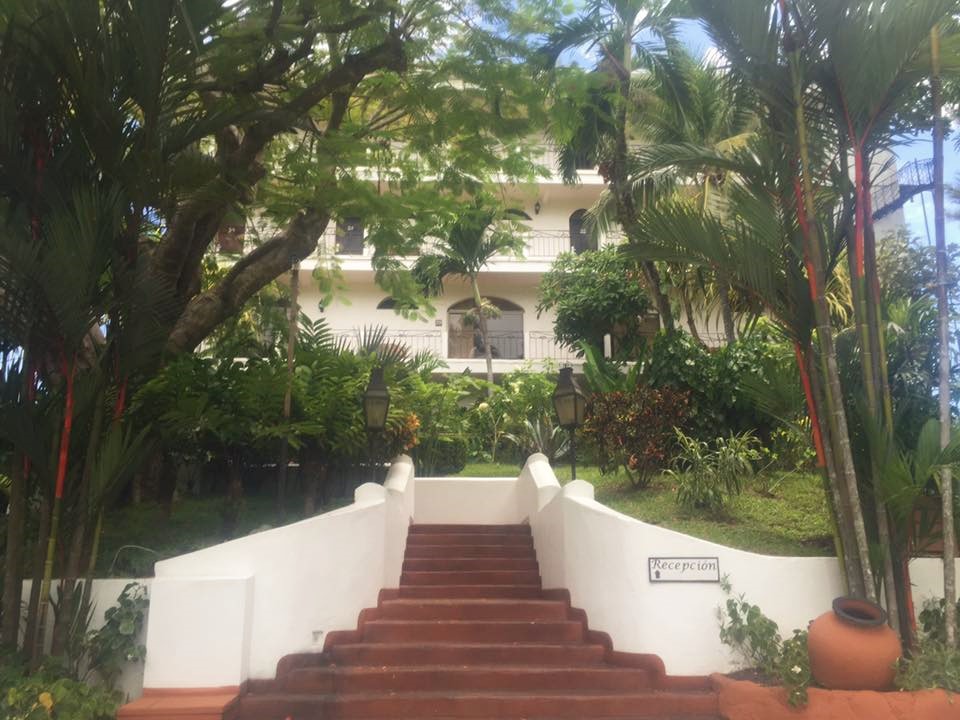 We had a balcony that overlooked the ocean and my favorite feature- there was a hammock! (I LOVE hammocks!) 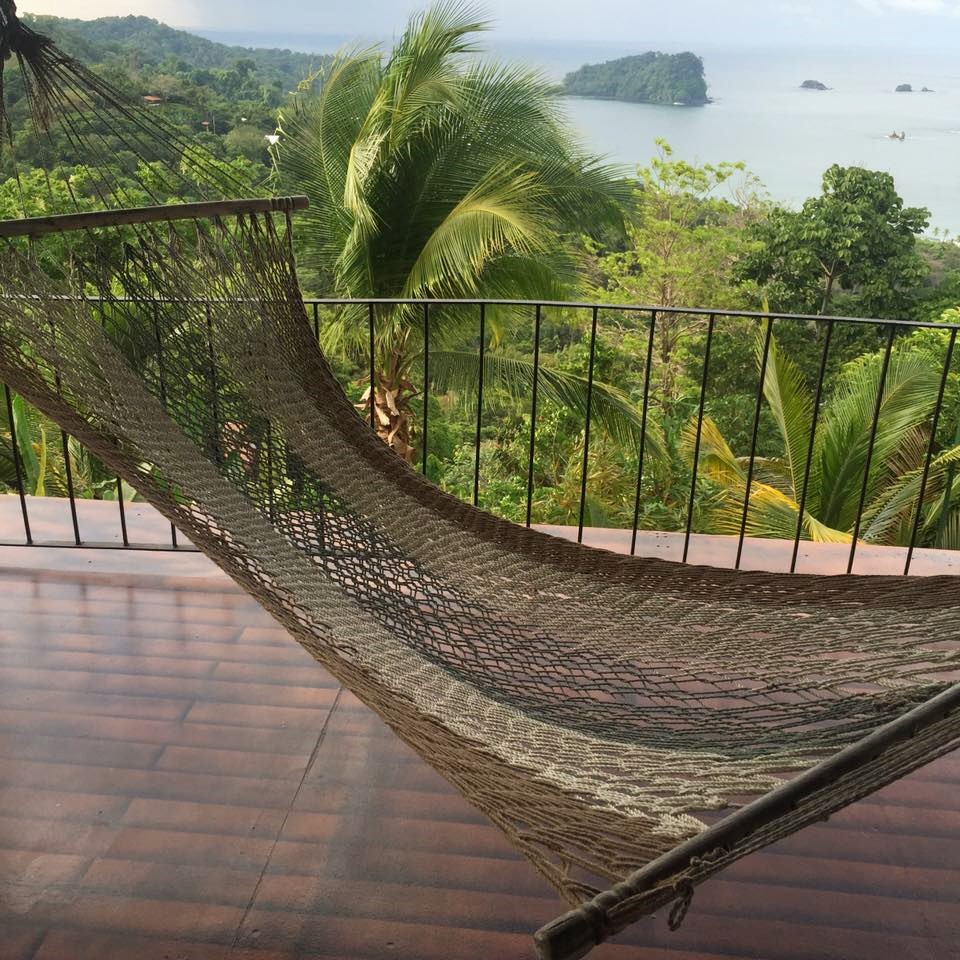 Saturday morning we woke up early and decided to head to the Manuel Antonio National Park. We saw monkeys, sloths, tropical birds, and lots of raccoons! We hiked all over the park, taking in the breaktaking views all over. Seriously, if you want to feel both incredibly small and simply amazed at the beauty of the world, Costa Rica is the place to go. 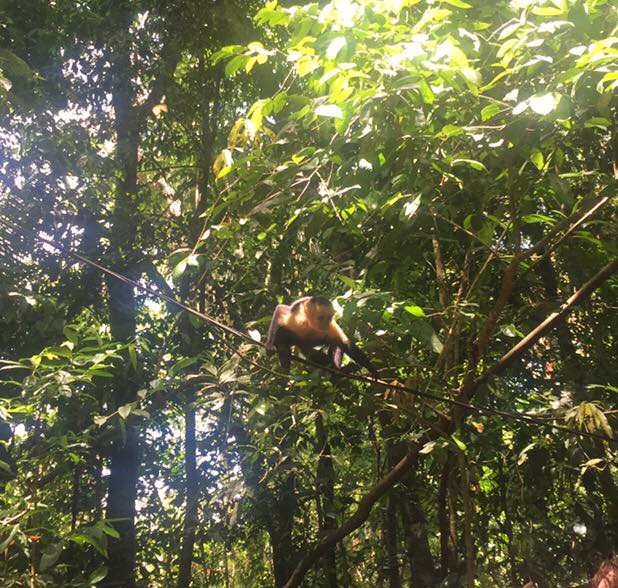 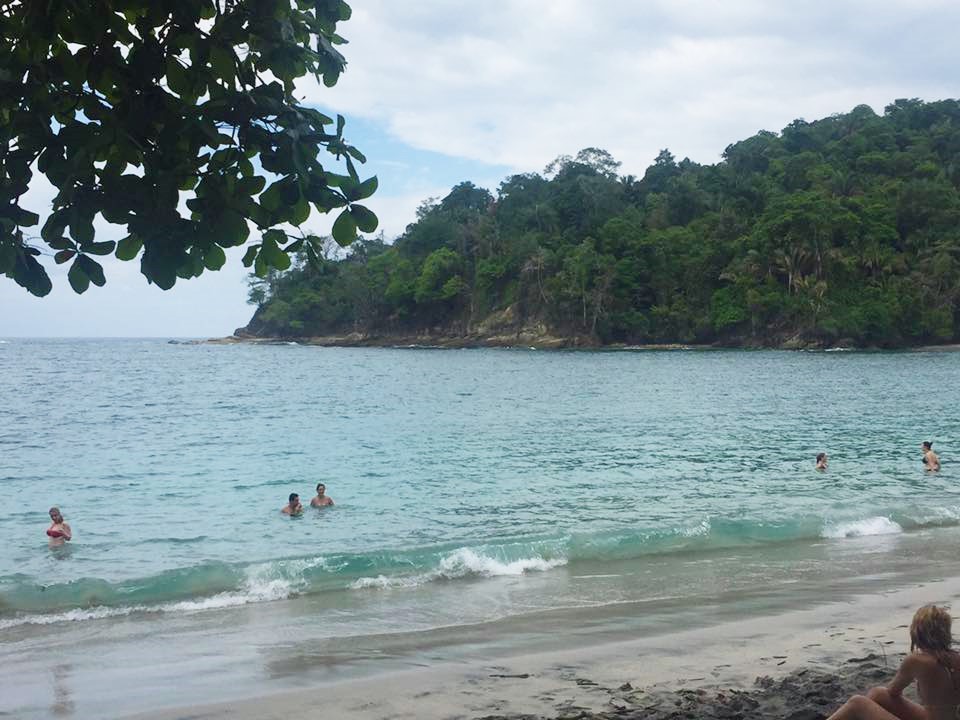 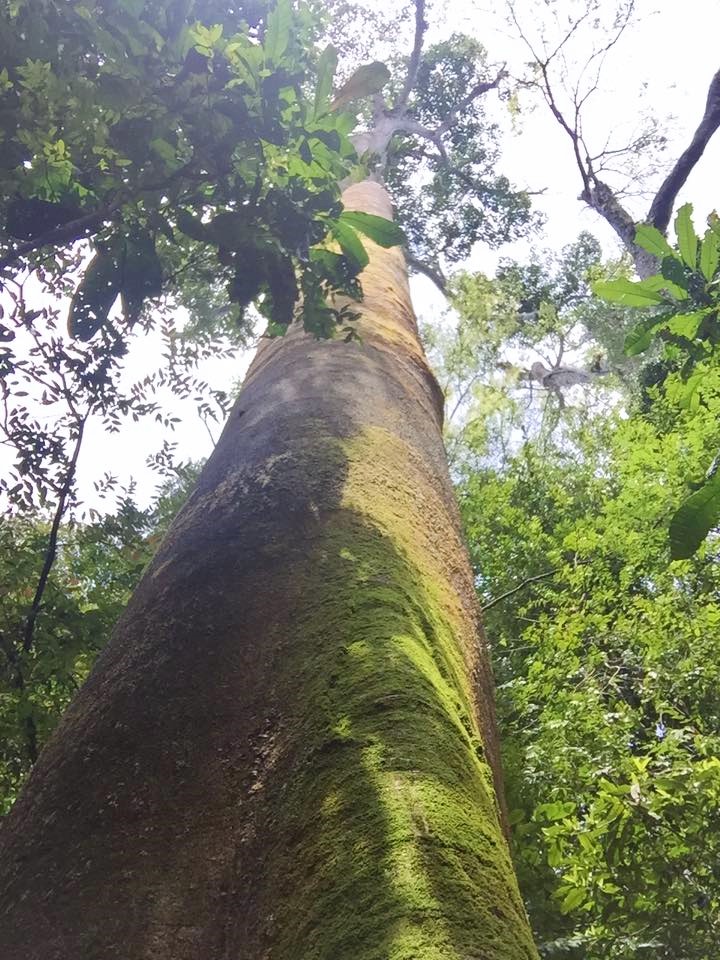 Saturday afternoon was spent recuperating from all the hiking! We had a great lunch at Salsipuedes followed by seeing lots of monkey in the trees on the walk home! 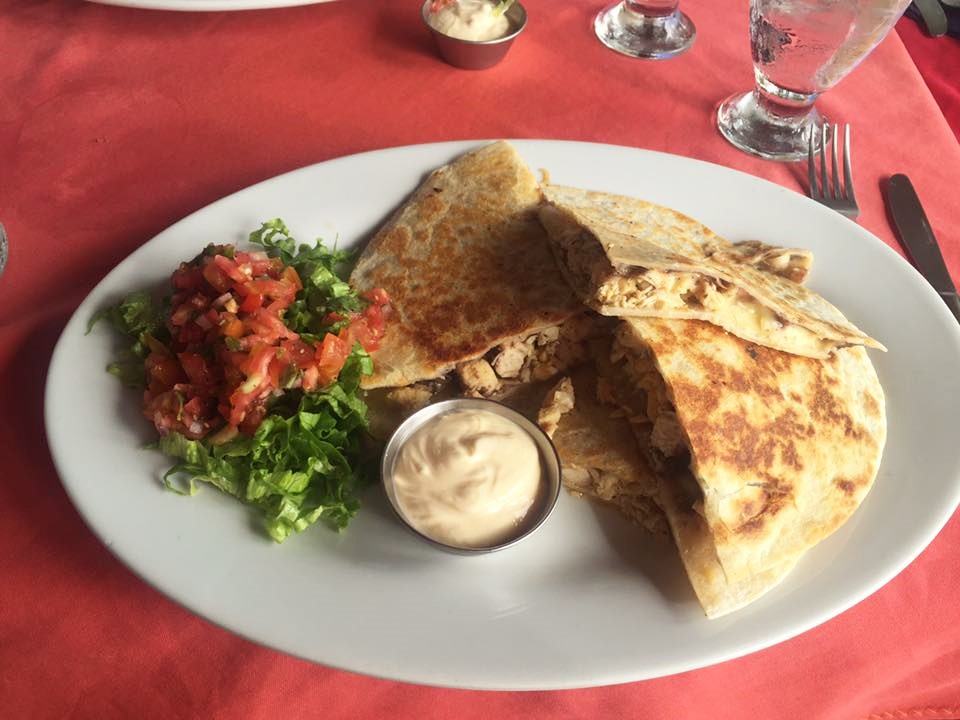 On Sunday we headed to the public beach and the weather was divine! 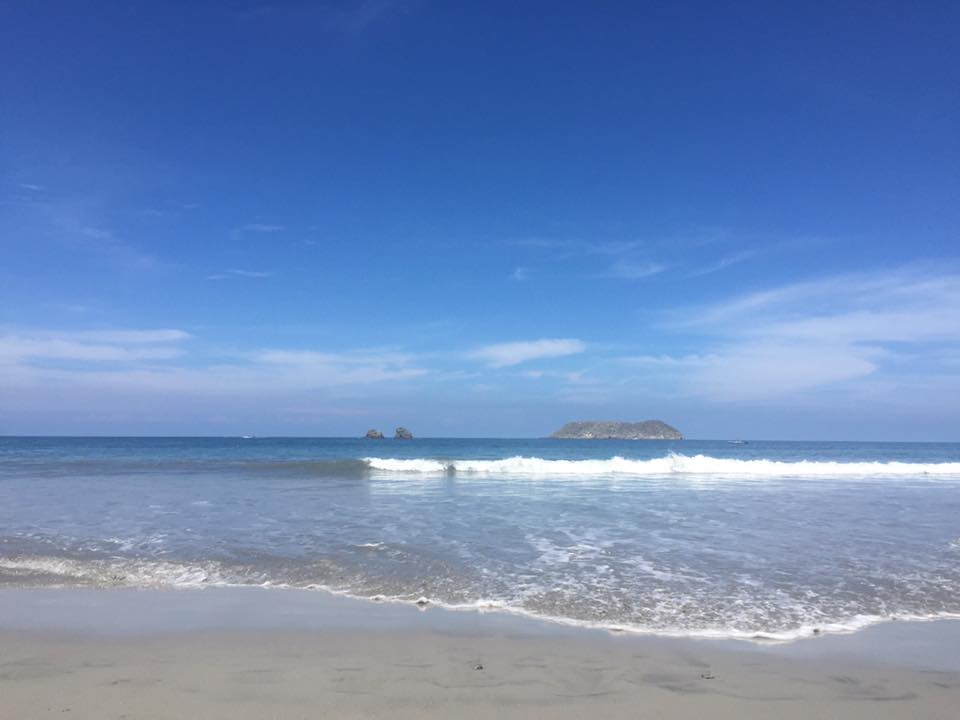 The water was warm, the temperatures outside were perfect under an umbrella and the beach was crowded enough with families you felt like you could leave your belongings unattended but not so crowded you couldn’t get your own space (and amazing views!). We had fun riding waves, watching surfers and just enjoying the sun! We celebrated Brent’s birthday dinner at Mar Luna (which came recommended by the locals) and it was SO GOOD. Brent had the fish of the day (which of course was caught that day) and I had some of the best chicken (I don’t do fish), vegetables and rice of my entire life!

Not only was the food amazing, the view at sunset was incredible! Plus, you could hear the howler monkeys while you ate! 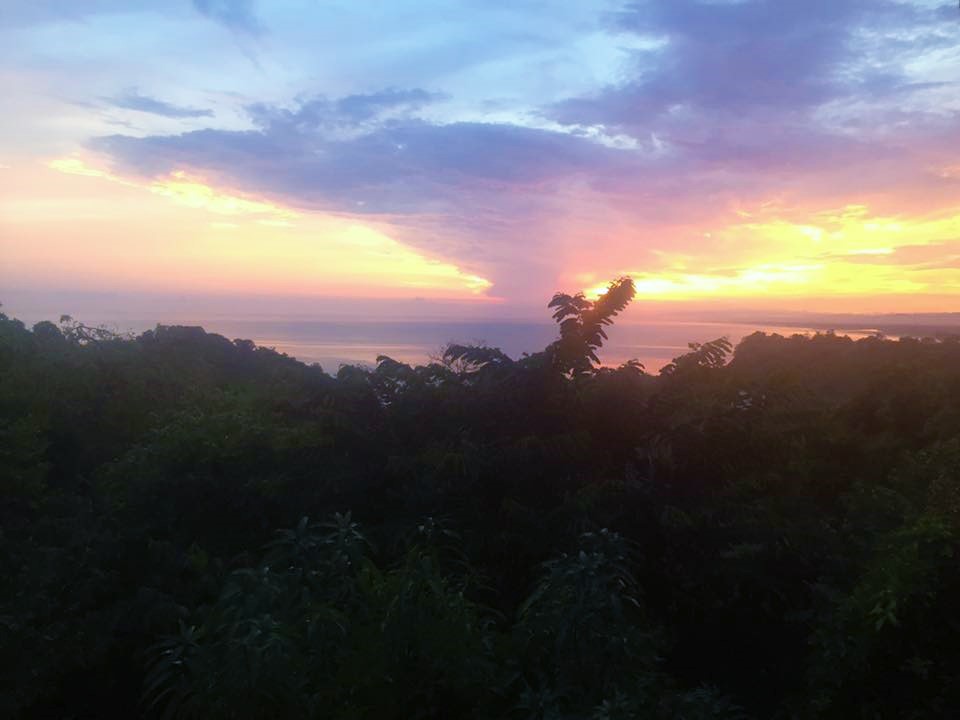 We rounded out the weekend with some time at the hotel infinity pool and a couple of meals at Emilio’s (some of the best sandwiches I’ve ever had!) before our ride came back to pick us up and take us back to San Jose for the night before we flew out the next morning. We were exhausted and really well-fed!

If you’ve been looking for a tropical vacation, I CANNOT recommend Costa Rica enough! Feel free to leave a comment or email me if you have any questions about planning your own trip there! I’ll help as much as I can! AND, of course, I’ve got a giveaway!! 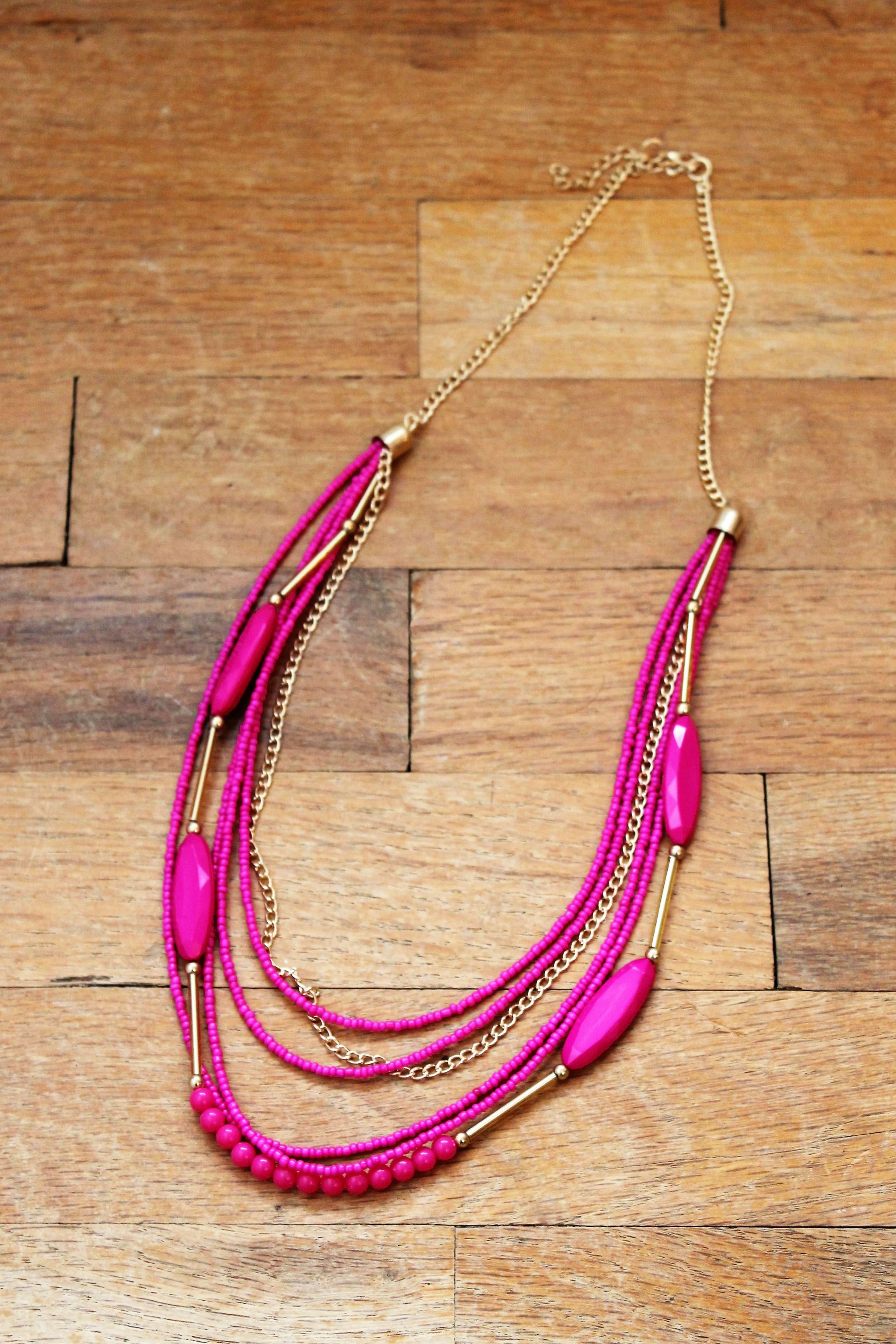 The areas I visited weren’t super conducive to shopping but I did find a couple of gorgeous necklaces that would be great for summer! I couldn’t decide which color of necklace I wanted so I’m letting a lucky winner choose one and I’ll keep the other! Which do you prefer, the pink or the black? Enter below! 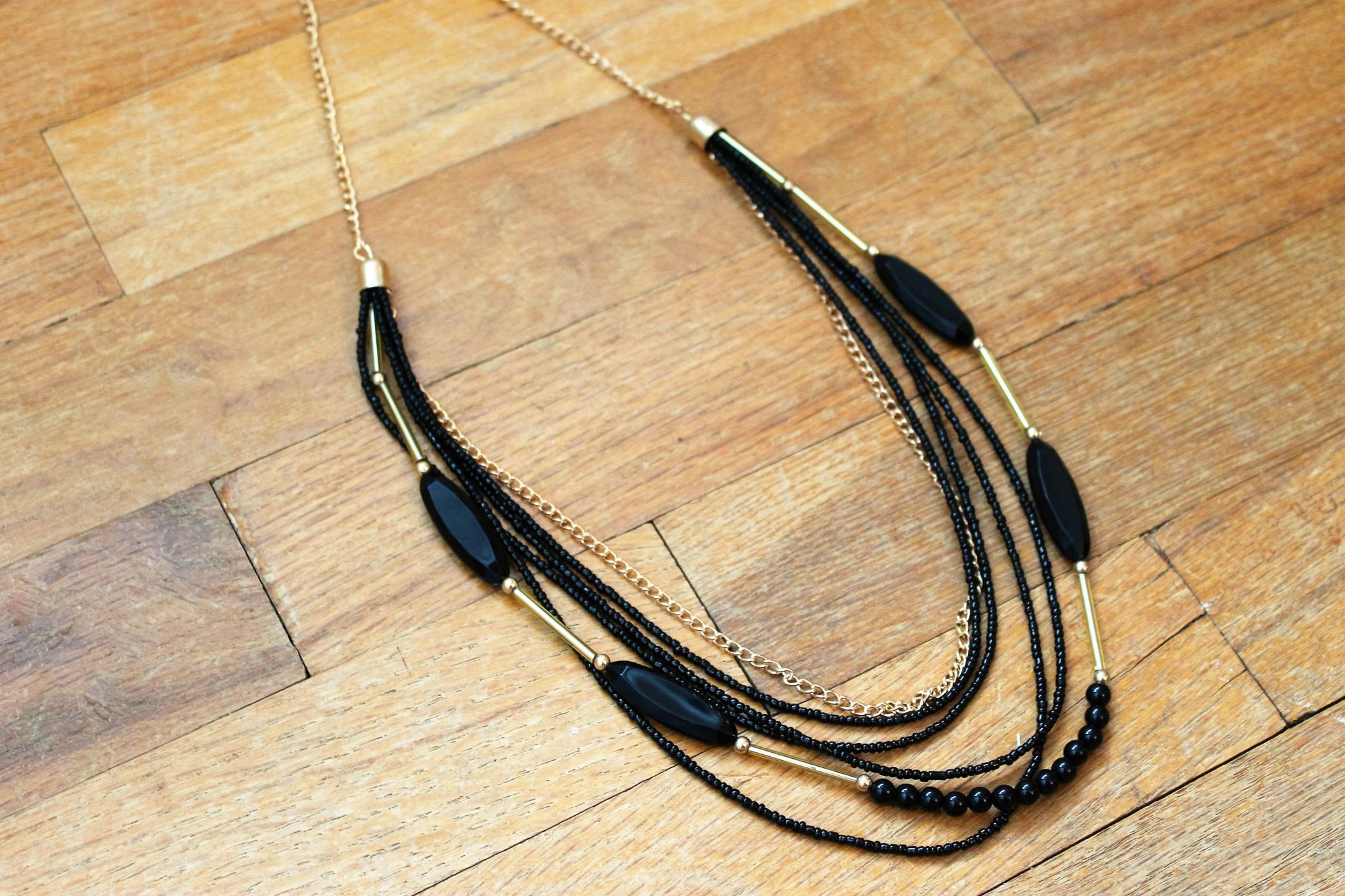 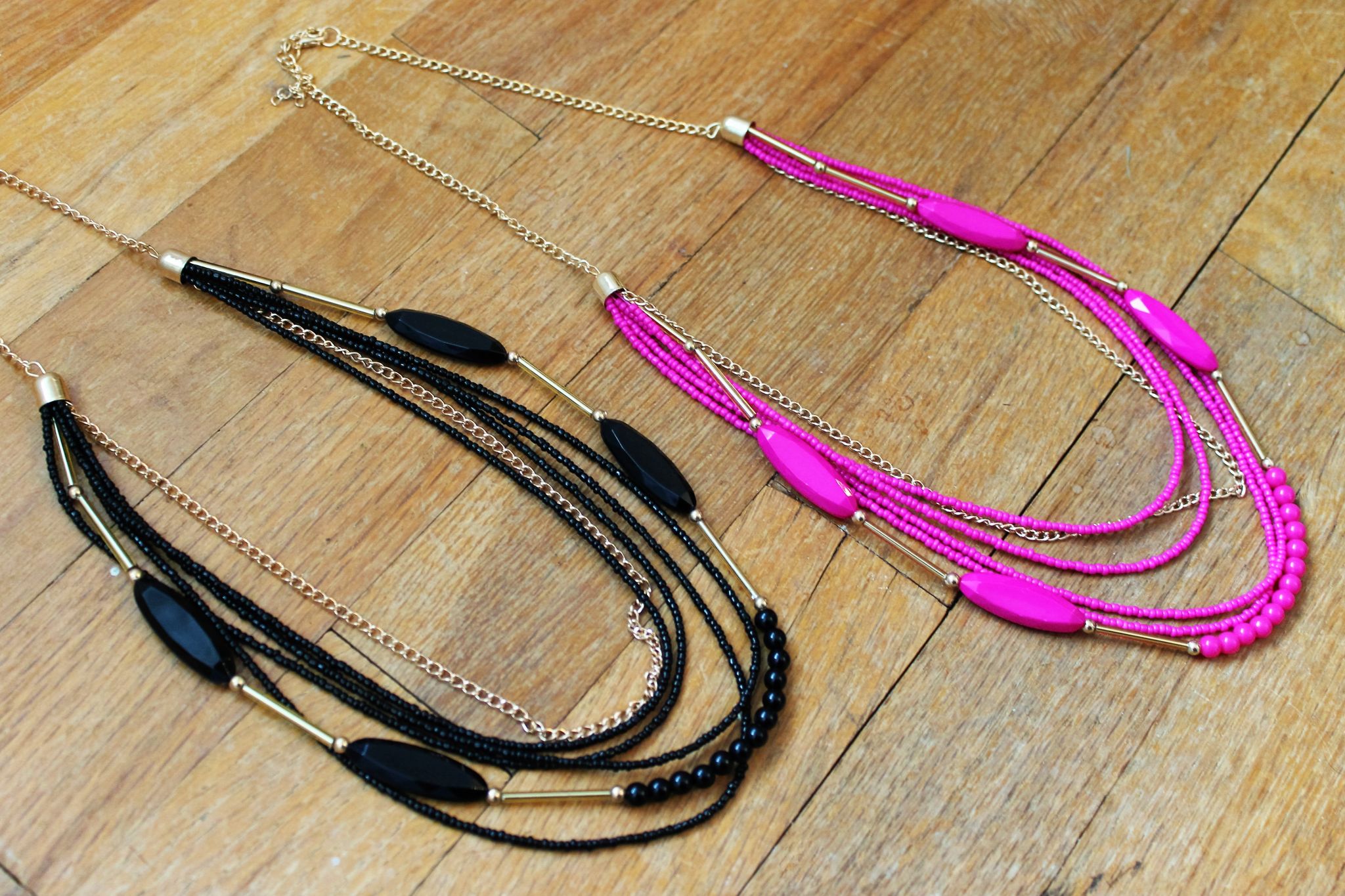 Winner will be chosen at random via Rafflecopter on May 31, 2016 and winner will be announced no later than Saturday, June 4, 2016. Contest open to those in the continental United States.

Giveaway, How to Wear

Feeling Blue (And you can too!) 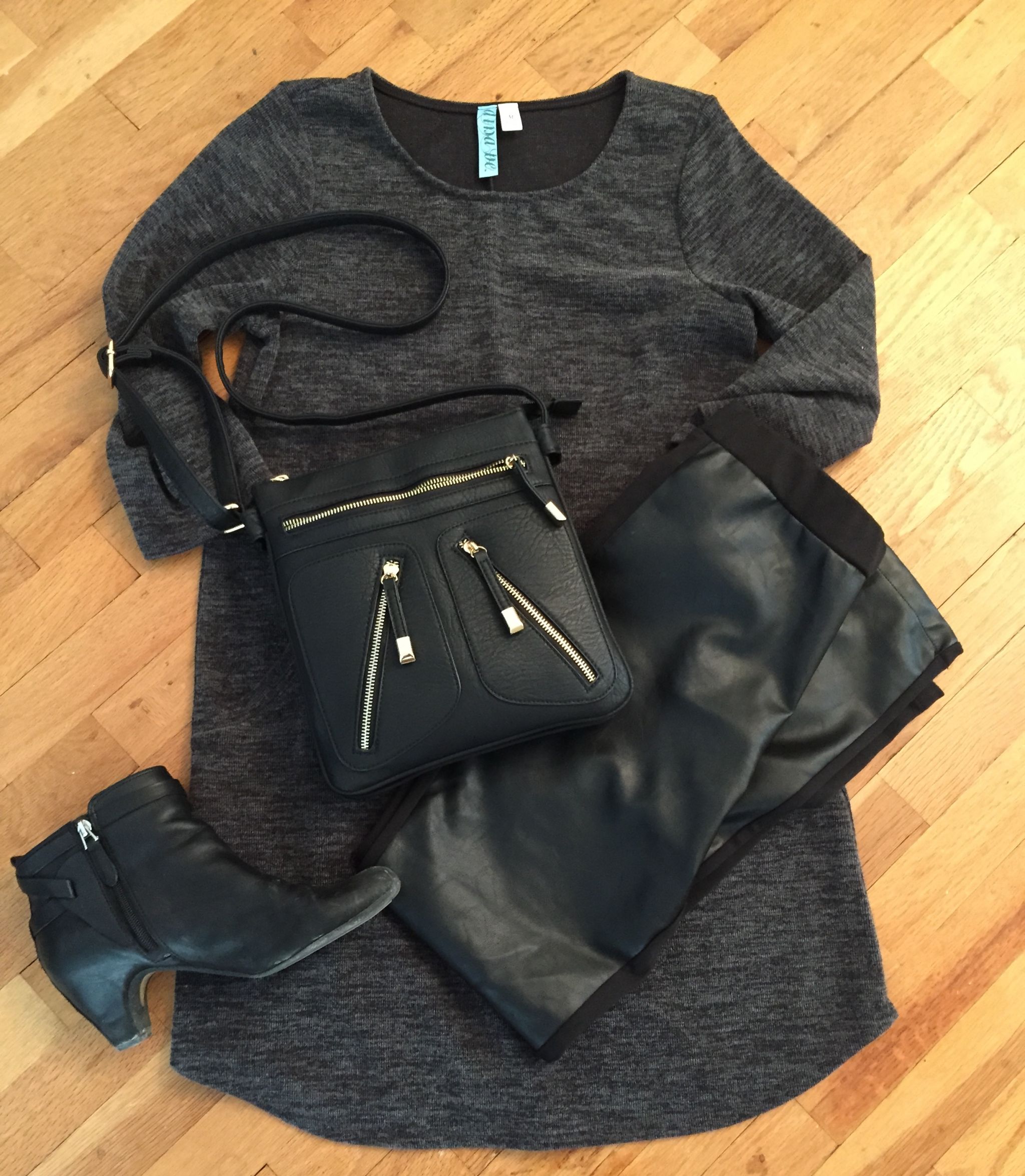